Cherubism is a congenital childhood disease considered to be of autosomal dominant inheritance. Cherubism is characterized by having painless bilateral enlargement of an individual’s jaws whereby fibrous tissue replaces the bone. 1 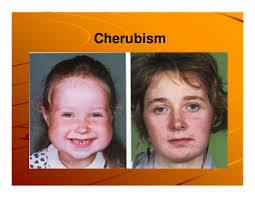 Cherubism is also referred to as familial fibrous dysplasia affecting the jaws although new genetic investigations tend to indicate that it is a separate entity.

This condition is usually diagnosed among children in the age of 2 to 7 years. In these children, there is observation of the symptoms increasing within the first 2 years following diagnosis (between 7 and 9 years), but the symptoms tend to stabilize or regress after puberty. Cherubism affects more boys than girls in a ratio of 2:1.

The growths make the cheeks have a swollen appearance that is round and tends to interfere with the usual development of teeth.

In some people, the disorder may be mild and it might not be noticed, but in others, it is quite severe and highly noticeable with some vision problems or speech, swallowing, and breathing troubles. 3 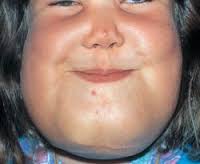 In normal circumstances, osteoblasts and osteoclasts work in a balanced way by building up as well as breaking down bones, thus ensuring that the strength of the bone has been maintained.

In individuals having genetic makeup that causes cherubism, their bone breakdown occurs at an increased rate and building it up occurs in an unusual way. The building up of the bone occurs through large multinucleated cells.

It is the imbalanced osteoclast and osteoblast activity, which is thought to contribute to the formation of fibrous tissue. The tissue appears as spongy substance or bubbles in radiographs.

In cherubism observation, the lesions are graded in different levels, which indicate the involvement of bones of the mandibles or maxilla as well as the resorption of teeth’s roots. The grading of the cherubism may also involve the orbits.

Research done on genetic materials picked from persons coming from families that have multi-generation diagnosis of cherubism has given the conclusion that a number of cherubism cases could be due to mutation changes that occur in the protein SH3BP2. The gene is found on the 4th chromosome.

This means that an affected parent is able to pass the condition to their offspring or children. On average, about 50 percent of the parents’ children can receive the gene. It has also been discovered that spontaneous cases can occur.

Again, the disorder tends to have varying penetrance, which means that the symptoms may manifest in different forms among the individuals of the same family who carry the said gene.

Clinical features of this disorder include:

Diagnosis of this condition is dependent on the underlying symptoms. Usually a physical examination is conducted by the doctor.

A family history may be looked at to see if people of the same family have experienced the symptoms. In addition to that, imaging tests using panoramic X-rays or CT scans may be ordered to further examine the symptoms.

A doctor may order for biopsies to be conducted to help find out if there is presence of cell patterns that resemble those of cherubism within the lesions.

The treatment of cherubism depends on the symptoms. Here are the treatment options a doctor may pursue to help the patient:

To help patients with this disorder, a doctor may provide disease management tips. First, radiation should never be recommended as a treatment option. To date, there seems to be no any specific established medical or clinical intervention in regard to the growth phase of the disorder.

Because the condition can affect the mental wellness of the child, parents should make sure that they talk about it with their affected children.

The children need to understand the condition and the body and mental changes it may bring in them. This is important especially during the teen age when kids become conscious of their body appearance.

Since this disorder is associated with changes in genes, the only way to help reduce its recurrences if by having genetic counseling. Because of lack of severe symptoms among parents, it may be the main cause of failure to recognize the disorder.

It is important to have parents tested for gene mutations before they have children. Again, since this disease arises due to genetic mutation, and considering that the gene may spontaneously mutate, it means that there may be no specific technique to prevent it from occurring.

An individual with this disorder may have other complications, which may come about due to the underlying symptoms.

For instance, a person with facial appearance being atypical may feel that they are different from the others. This could result in psychological and mental problems and therefore counseling may be needed. Children in their adolescence and teen age may be most affected.