What is Argyll Robertson pupil?

Argyll Robertson pupil refers to small bilateral pupils that are able to constrict when an individual tries focusing or viewing an object near him or her, but when the pupil is exposed to bright light, it does not constrict or respond to that light stimuli. The pupils in AR pupils react to accommodate while not showing response to light. 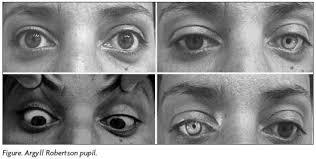 Argyll Robertson, a Scottish ophthalmologist and surgeon pointed out that a number of patients having tabes dorsalis were seen to have small pupils that didn’t adequately react to light, yet they reacted promptly if the patient viewed an object within the reading distance.

When you say the pupils accommodate, it means that they reduce in size when a person views an object in near distance. This observation has been noted as a useful clinical sign in those people suffering from syphilis.

The pupil will respond to light through what is called direct light reflex, and to some extent, it will respond to near accommodation. There are pathways of pupillary reflex, which lead to the constriction. When there are interruptions of the elements of the pathways, it could result in poor constriction of the pupil.

The pathway involving pupillary constriction in both eyes consists of an afferent limb that transmits sensory information to the midbrain and then there are efferent limbs involved in the process.

What is Light Near Dissociation?

This is a stronger response to near objects than light response. Light-near dissociation, also referred to as pupillary light-near dissociation may occur due to weakness of the pupillomotor input, dorsal midbrain syndrome, misdirection of ciliary muscle fibers, or the Argyll Robertson pupil phenomenon.

There are other conditions and situations that may cause light-near dissociation and they include:

These are frequently linked to syphilis and tend to be small. They are almost always bilateral and with no constriction to viewing direct light or just a little constriction, if any. Nonetheless, there is prompt or normal pupil constriction when an individual views near targets or objects within the reading distance.

In this phenomenon, there are different observations seen.

In the three cases of tonic pupils, it has been confirmed that there has been abnormal regeneration occurring on the orbital peripheral nerves. 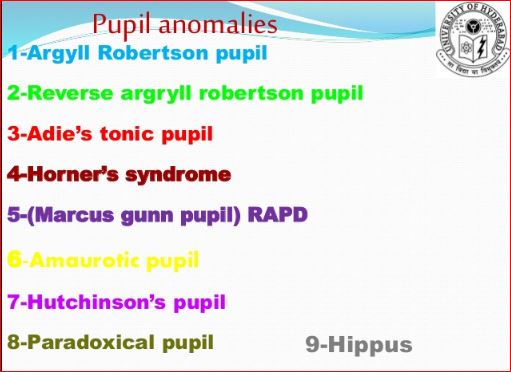 Tonic or Adie’s pupil is thought to be caused by damage that occurs on peripheral pathways leading to the pupil, especially the parasympathetic neurons found in the ciliary ganglion.

The pathophysiologic processes that lead to Argyll Robertson pupil are not clear, but it is believed that a bilateral damage occurring in the pre-tectal nuclei of the midbrain may be responsible.

An area of the midbrain called rostral has been implicated by researchers as the one affected in the case of AR pupils. A lesion occurring in that area would probably damage the efferent pupillary fibers occurring on the Edinger-Westphal nucleus, which is associated with pupil’s response to light.

A lesion in the same area would probably spare the fibres that are associated with response to distance.

Until today, the connection between syphilis and the different types of pupils is not understood. Tonic pupils can be seen in people with neurosyphilis, but it is not known if this disease caused by a bacteria can lead to tonic pupil. In such patients, there may be a coexisting peripheral neuropathy.

A person with this eye phenomenon exhibits aspects such as:

Syphilis is the most associated cause for this phenomenon, but there are other possible causes such as diabetes and alcoholism. The AR pupil has been detected in people with various disorders that cause lesions in the Edinger-Westphal neurons. MRI studies are able to localize these lesions in cases of conditions like sarcoidosis and multiple sclerosis.

There is the idea that syphilis results in a pupillary light-near dissociation by damaging the pathway of pupillary light reaction in the midbrain or central brain and leaving the near reaction pathways intact or not damaged.

This is why there is near-light dissociation occurring without any level of tonicity of near object reaction. This is the Argyll Robertson or AR pupil phenomenon.

The body’s immune reaction to bacteria known as treponema pallidum, which causes syphilis brings about effects on the blood vessels and meninges. It is believed that in tabes dorsalis, it usually targets dorsal root ganglion, which is a section of the peripheral nervous system.

When there is damage of the peripheral nervous system, it tends to cause radiculopathy, and this accounts for the symptoms of tabes.

The diagnosis for this condition may be done in the following ways: 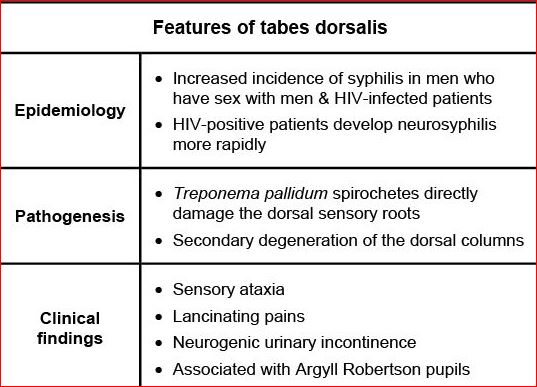 Treatment of this condition is dependent on the underlying cause. Since the primary cause is syphilis, a patient with this bacterial disease is treated with penicillin, which cures almost all stages of the syphilis.

An individual may be administered a course of doxycycline or tetracycline for a period of 2 to 4 weeks as a substitute medicine. Other underlying diseases are treated accordingly.

Why Cases of Argyll Robertson pupils have Reduced?

Tonic pupil is mainly associated with peripheral neuropathy or the Adie syndrome and not with syphilis. Before penicillin was used to treat cases of syphilis, AR pupils were prevalent. However, when this antibiotic came into use, it saw decreased cases of AR pupils.

It can be said that AR pupils are very rare. Today, a patient who has pupils that accommodate or reduce in size when he or she views an object in close range, but the same pupils do not react, in most cases, it is always a case of tonic pupil and not AR pupil.

In the past when medication for syphilis had not been found, you would find that a pupil that accommodates, but doesn’t react would be most likely an AR pupil. The point to note here is that AR pupils are rare to find today and what you encounter most are the tonic pupils that do not have any causal connection with syphilis.

Why Argyll Robertson pupil Phenomenon is Associated with Prostitutes?

Syphilis accounts for the most pronounced cause of this phenomenon, and because prostitutes are at risk of contracting syphilis, that could be reason why it is associated with these group of persons.