What is Pectoralis Muscle?

The pectoralis muscle or also known as “specs”, “pectoralis major”, and “chest muscle” is a large fan-shaped muscle covering part of the chest. Its origin is from the sternum, shoulder girdle, and the first six ribs. Its insertion is on the proximal end of the humerus. This muscle forms the anterior wall of the axilla and acts to adduct and flex the arm. 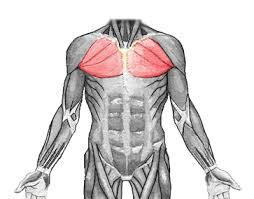 The pair of pectoralis major is one of the skelateal muscles in the trunk. It is located anteriorly or in the front part of a human body.

The origin (where the muscle is attached proximally towards the body) of the pectoralis major is in the medial half of the clavicle or what is called, the clavicular head. It is also connected to the sternal head (sternum is the medical term for breastbone).

More completely, the pectoralis muscle is also located in the sternum, upper costal cartilages (1-6), and the aponeurosis of the external oblique.

The insertions (where the muscle is attached distally away from the center of the body) of the pectoralis major are in the lateral lip of the intertubercular(bicipital) groove of the humerus, as well as in the crest of the greater tubercle of the humerus (the long bone in the upper arm). 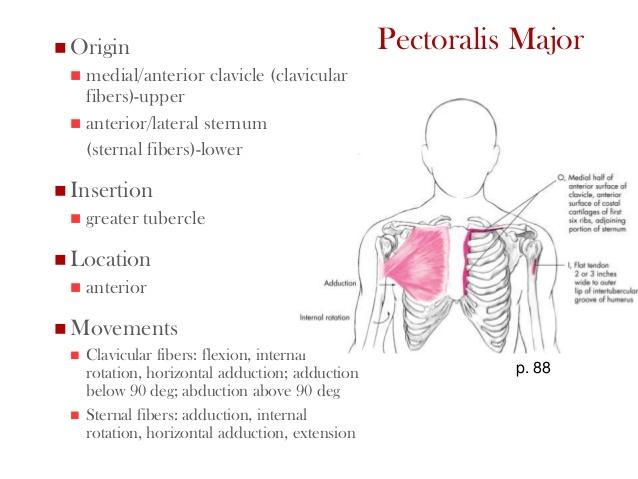 Pectoralis major also serves as protection of some of the internal organs in the chest are such as the heart and the lungs. The muscle also plays a major role in protecting the carotid artery. Carotid artery is the major blood vessel that supplies blood to the brain so its rupture would be disastrous.

Some Diseases/Injuries Related to Pectoralis Major

Pectoralis Major Rupture is the partial or complete tear of the pectoralis major. Although considered rare, this has become more common because of the popularity of strenuous work-outs and Bodybuilding. This commonly occurs during exercises which work to push arms in front of the body such as in bench press.

There are different types of the tear. The physician evaluates if the muscle tear is reparable with surgery. Ruptures of the humeral insertion (tendon ruptured from the bone) and some ruptures at the musculotendinous junction (rupture in between tendon and muscle) can be surgically repaired.

Rupture of the muscle belly (rupture in the muscle itself) and muscle torn off the sternum bone (breastbone) are extremely rare and are currently not advised for surgical repair. Non-operative managements include sling immobilization, rest, ice packs, and Non-steroidal Anti-inflammatory Drugs (NSAIDs).

Since bench press is the most common exercise in which this injury happens, weightlifters should be instructed proper bench press techniques. They should limit the distance when the bar is lowered and narrow the grip of the hands to the bar.

Lowering the bar too much towards and chest, as well as widening the grip of the bar put stress to the chest muscles and making them more prone to tearing. Studies also show use of steroids can weaken the tendons so it is best to avoid those.

Poland’s Syndrome is a birth defect characterized by underdeveloped or absence of the pectoralis major. This often occurs on one side of the body, although some have claimed to have bilateral cases. Poland’s syndrome is also often accompanied by webbing of fingers on the same side.

It can be corrected the insertion of a custom implant designed by CAD (computer aided design). The surgery usually lasts for less than one hour under general anesthesia. The implant will replace the pectoralis major muscle, thus enabling the thorax to be symmetrical 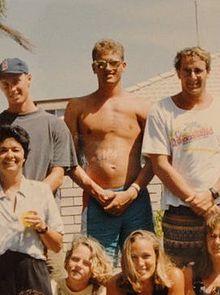 A number of notable figures have acquired Poland’s syndrome. They include actor Ted Danson from the television show “Cheers”, Olympic boxer Jerome Thomas, and Formula One World Champion Fernando Alonso.

Chest muscle pain can be caused by different factors such as improper posture, trauma, fatigued muscles due to overuse or sudden jerks during weightlifting, and overstretching.

It is critical to differentiate chest muscle pain from heart attack so it is best to consult a professional especially if the pain is unbearably sharp and radiates to the left shoulder and arm (signs of an impending heart attack).

Chest muscle pain can be treated by rest, pain relief measures, surgery (if needed), and physiotherapy, and proper diet. Rest can restore any minor damages in the muscle and can let the person avoid activities that aggravate the pain so complete rest is advised.

Ice packs could provide immediate pain relief to the affected areas, as well as decrease the inflammation if present. Analgesia is also prescribed in some cases to decrease or diminish intensity of pain.

Physiotherapy such as soft tissue massage, joint mobilization and manipulation therapy, and progressive exercises is highly beneficial especially during the recovery phase to avoid recurrence of chest muscle pain.