What are Pinpoint Pupils?

Pinpoint pupils occurs when, in normal light, the pupil of the eye constricts less than 2mm. The pupil is a rounded medium sized hole which allows light into the eye that hits the retina (located at the back of the eye). It is located at the center of the iris as shown below.

The pupil being the entry point of light, it has to regulate the amount of light that enters the eye. In bright light, the pupil usually constricts (becomes smaller) so as to reduce the amount of light reaching the retina. For a person who is in a dark room or a room with dim lighting, the pupil dilates (becomes bigger) in order to allow as much light as possible to enhance clear vision.

The pupil protects the eye by constricting to reduce entry of bright light such as one from a lamp or sunlight but with it time it is supposed to dilate as the eye adjusts. However, if the constriction goes below 2.0 mm in normal lighting (pinpoint size) then there is a problem caused by a disorder known as pinpoint or miosis (also myosis). The condition is usually associated with the slow reaction of the ganglion cells compared to the cone and rod cells, which are all photoreceptors. Pinpoint pupils are important indicators for diagnostics and prognostics during emergencies.

When you visit a doctor for any diagnosis emphasis is put on observing the eye as it always gives telltale signs of underlying issues. In pupillary observation, the focus is on the size and shape of the pupils in bright light. The normal size of the pupil ranges from 2-8 mm and are equal in size. Both pupils should also react equally when examined.

The physician then reduces the light and instructs the patient to stare at a far object say the wall. Here asymmetry is sort using an ophthalmoscope. If an abnormality is present then the pupils will vary in the red reflex of the instrument. 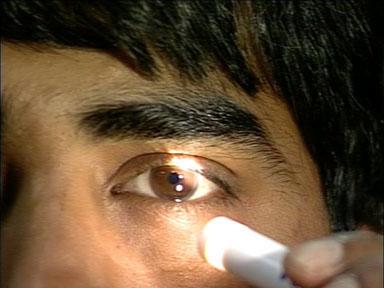 There are three reflexes tested:

In this test, the relative afferent pupillary defect- RAPD- (varying afferent conduction) is looked for. The test is conducted through illuminating light from one eye to another. In normal cases there is bilateral pupillary constriction.

When RAPD is present the pupils appear to dilate instead. At times the problem lies with the efferent signal. In such a case the problematic pupil is unaffected throughout the test while the normal one constricts accordingly.

Just as the name suggests, the test uses distance as the indicator. The doctor will instruct you to fixate your gaze to a wall then bring an object near to the eye (at an arm length). The constriction of the pupil signifies normalcy. The test is well conducted in a lit room.

For this examination, the patient is asked to stare at a distant object while the doctor shines light from the left and right side. Normal pupillary function will show bilateral constriction. If not, then a disorder is present

A number of factors may cause myosis, and they include:

Drug abuse is the most common reason for this ailment. Some of the drugs that can lead to myosis are:

Opioids are psychoactives that is they can reach the Central Nervous System through the blood-brain barrier. They are usually used as pain relievers but unregulated use can cause addiction. Abusers prefer it since it modifies consciousness and awareness. Overdose of opioids such as oxycodone and morphine, lead to pupil constriction.

These are also known as benzos and are also psychoactives. Other problems associated with them include: panic attacks, seizures, anxiety and insomnia.

Both viral and bacterial infections could lead to the pupil becoming pinpoint size. An infection of the eye such as uvetis causes harm to the centre of the eye which can become inflamed causing adhesions of the iris and the lens. The eye tissues clump together restricting expansion and contraction of the pupil.

Other infections may not be directly on the eye but can directly affect the pupil size. Neurosyphilis is one such disease that affects the spinal cord or the brain to the point of affecting sensory organs of the eye.

Problems of the brain

Brain complications such as pontine infarction and hemorrhaging lead to injuries of the brain causing stroke, illness and brain damage. When the front part of the brain is affected both pupils become small but when other areas of the brain are affected one pupil dilates as the other constricts.

Chemicals can also play a part in this ailment. Components such as organophosphates found in pesticides bring about this abnormality as these chemicals have the ability to cause overexcitement of the parasympathetic system. When handling pesticides, constriction of the pupils signify poisoning which needs immediate attention by a qualified medic.

Some physical disorders such as the Horner syndrome can also result to this condition. The facial and the eye nerves of a person with this disorder do not function as expected.

For the face, the part that is affected, less or no perspiration takes place while for the eye the pupils show signs of myosis and the eyelids are drooped. New born babies with the disorder have one light iris while the other is dark.

Pinpoint or myosis is not a disease in itself but an indicator of an underlying ailment such as brain damage and the Horner’s syndrome disorder. To treat this abnormality, the root causes of myosis should be addressed.

In case of a brain damage, doctors will aim at relieving any pressure occurring on the brain to avert damage of this vital organ. Administration of a drug known as Narcan to patients having pinpoint pupils and disoriented mental state can help establish whether the situation is caused by overdose of a drug or it is due to hemorrhage.

If it is a case of altered mental state causing pinpoint pupils, a patient will respond to the drug Narcan. In the event that the patient does not respond, then it is likely that the pinpoint pupil is occurring due to pontine hemorrhage and doctors are able to know what kind of treatment is required.